The True Story of How and When CRM Software Was Invented 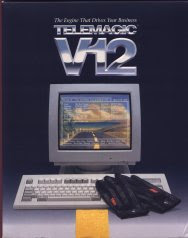 A reason why it was so unique was because it represented a paradigm shift in the nature of user software. Virtually all software products at the time were really special-purpose tools designed to accomplish a certain task (word processing, spreadsheet, accounting), whereas what DoubleM had in mind was a collection of tools that were integrated to perform real world needs (sell more, build a business, customer support), and to do it in such a way that you didn't need to know much about computers. At the time, most computer users were the early adopters, the people who knew about computers, so the software of the time was designed knowing that users were already literate with them. In order to enter an entirely new market, the software had to be an order of magnitude easier to use, it had to be so easy to use that a salesperson could use it, someone who had slim to zero computer experience.

The essential purpose of the product was to create cash for the user, because that was DoubleM needed most at the time.
If he could get a computer to create cash, that would be a good thing. There were zero products in existence at the time that were focused on creating cash, quickly, and building a business around that goal.

The software would have have a couple of key features:
1. It had to be Open, integrating with other software products, for example it had to integrate with whatever word processor and accounting software the user was already familiar with. After all, if you are going to be using the computer to sell, you should be able to enter the order and send a thank you letter at the same time.
2. It had to be able to dial the phone, regardless of what phone system the user had.
3. It had to be customizable by users in a wide range of "vertical markets" for example, stock brokers, recruiters, real estate sales people, insurance, telemarketers, and even Catholic churches. It had to be a universal product.
4. And not just customizable by users, but also other developers who could get deeper into the operation of the software and create entirely different market specific capabilities. These would be product variants that could be sold by others at a higher price than the base product. This gave the product the aura of a general purpose opportunity for people to get into the highly profitable and rapidly growing software industry.
5. It had to keep notes that documented the history of all interactions with the customers. This feature alone would have huge advantages for company owners and sales reps alike.
6. It had to be trivially easy to find any customer's records, quickly, by business name, or individual name, and able to file the records by "recall date" (when the customer was to be contacted next). Virtually all sales record keeping at the time was done with 3x5 cards in a shoe box, or a Rolodex™and once the customer's card was filed by recall date, it was no longer retrievable by company name or individual name. So having the ability to retrieve records from a database using multiple keys (indexes) was big stuff in those early days. The tools to do this were primitive and clunky and not suitable for inexperienced users.
The idea was presented to Sean Curtis, at Coffee Ambassador, in late 1984, and it went like this: the product DoubleM imagined would cost the company $5,000 and they could use it forever with free new features and bug fixes.  The only catch is that the ownership of the software would stay in the name of DoubleM, who would sell it to other companies, hopefully. The deal was agreed.
After the check was signed, DoubleM did the name test and offered Sean Curtis his choice:
1. TeleMagic, or
2. Michael's Magical Money Machine

Sean chose option 1, and so TeleMagic was born at that moment.
Going from idea to reality was the difficult part, of course. There was zero money to hire a programmer for the work, so DoubleM had to do it himself, nights and weekends, when he was back from the paying customers offices. Don't give up your day job, the one paying the bills. Violate that rule and you wind up homeless and hungry. So the days were long during that winter, but eventually the demo day was set in early 1985. The customer loved it. CRM was born.

The Main Menu of that first version had 3 choices:
S - Start
E - Everything else
X - to exit the program

The Start concept was unique in that the product represented a semi-automated process that could be turned on or off at will. Start initiated the process of creating cash. Enter S to Start making money, enter X to stop making money, and E for everything else, like printing letters, reports, doing backups, etc. Just 3 choices, S, E, X... oh, my, look what that spells! Well now that we have your attention, let's see what this thing can do...
DoubleM gifted the software to friends who used it in their businesses; they got excellent results with it. It was time to take the next step. The first sales rep was hired, John Briches, a waiter in a local restaurant, who started part time as a commission only telemarketer, using the software to sell the software, to Value Added Resellers (VARs), people who would in turn use the software to sell their software and services and consulting, which is exactly what DoubleM was doing before he built the software. it was magnificently recursive and self optimizing. People who saw it "got it". It was off to the races.
Soon enough, however, competition popped up: Act!, Maximizer, SaleMaker, GoldMine, and a cast of what seemed like hundreds of copycat products. It was as if the wold of software all got the idea very quickly starting in 1986-88. When there were a few products that seemed to do similar things, some software industry writer put them into a category and called it "Contact Management".  If you called it "Sales Automation" you could get more money for the same software! Then years later it was changed again to "Customer Relationship Management". But it was all the same, really. Just an electronic Rolodex, a name and address list, on steroids, with lots of bells and whistles that improved the productivity of all who used it.
That first software product was continuously improved to version 14.5 for the DOS platform. There was a Windows version in early '93.
The software was primitive by today's standards but it was amazingly effective. Among all of the early CRM products, the first of them, TeleMagic, stood at the top because it was so easy to use, and yet very powerful. By the time competition appeared, that first product had lots of iterations of the Build-Sell-Learn loop, TM was, and stayed, far superior to other software companies' offerings. But hoards of rabble copycats were catching up fast and it was always a game of cat and mouse, rapid development, and mad selling.
There are lots of stories out there that credit the first CRM to Act!, which appeared much later, in 1986, and even GoldMine, which published in 1988 at the earliest, but TM was there before them all, chugging along every day at Coffee Ambassador in San Diego. They continued to use the software for the following 25+ years. Many companies still use the earlier DOS versions to run their entire businesses. Besides the PC, for DOS and Windows, TM versions were built for Unix, Mac, AS-400 systems,  translated into foreign languages and sold in many countries, although the USA remained the primary market.
Freed from the stresses of the software business at last, DoubleM went on to some other amazing adventures that have been recounted elsewhere. This is just the story of the first CRM; you can do more research at DBLM.com.

Sage seemed conflicted about their investments in the CRM marketplace, having also purchased Act! and another CRM product, then sold them off, but kept TM all these years. TM is still selling, 32 years later, and supported by a core of dedicated VARs, even though Sage stopped development many years ago. Based on Sage's actions, it could be argued that they did everything they could to kill TM; but it's the software product that will not die.

This post was originally created on 4/29/17, and may have occasional edits as typos and/or inconsistencies arise.
Signed: "DoubleM"
aka:
Michael McCafferty,
Del Mar, California
Mobile:  858.342.6949
Email:    mm@DBLM.com
Website: DBLM.com

What You Say Is What You Get
Describes the days of desperation and poverty, the bankruptcy, and how the turnaround started. The premise is the power of positive (self) talking. Click the title to read the chapter. Copyright 1991, George Walther.

The Greatest Sales Stories Ever Told, from The World's Greatest Salespeople
A brief look at the start of the TeleMagic adventure, and the critical role played by the poster "The Ten Commandments of Managing a Young Growing Business". Also describes the negotiations during the sale of the company and the lessons learned. Click the title to read the chapter. Copyright 1995, Robert L. Shook.